The previous president, George W. Bush, had heart. No matter what else you might say about him, skills or inabilities, errors or successes, you have to admit, the man had heart. 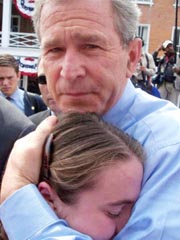 Pres. Bush gets on top of the wreckage with a retired firefighter helping out at the World Trade Center, a few days after Sept. 11, 2001.

Now compare that to the current president, Barack Obama. I cannot think of any photos of him showing real heart. This is more typical:

Nose up in the air, in a classroom of little kids.