The news accounts vary, but one from AP seems unusual:

Iran Hangs 3 for Involvement in Deadly Mosque Bombing
AP/Saturday, May 30, 2009

The three men supplied explosives to the perpetrators who carried out the Thursday bombing in Zahedan, 1,000 miles southeast of the capital Tehran, said a statement issued by the judiciary.

Ebrahim Hamidi, the head of the justice department in Zahedan, said that the men were actually arrested before the mosque bombing, but they had “confessed to importing explosives into Iran and providing them to the main person behind the attack.” [Emphasis added.]

I smell a rat.

They had these three guys before the bombing, yet the bombing still happened?

Who benefits from the mullahs of Iran exploding a mosque, blaming it on a small Sunni band, then hanging the three guys two days later?

Is the bombing a provocation under color of law?

Are the mullahs preparing to give up Osama bin Laden? 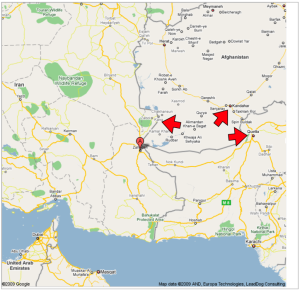 This entry was posted in foreign and tagged bin Laden, iran, Zahedan. Bookmark the permalink.